The height of Mount Kilimanjaro

The height of Kilimanjaro

Attracting about 50,000 climbers every year, Mount Kilimanjaro is without question a special tourist destination. Apart from its beautiful panoramic vistas and unique feeling of adventure, this mountain is the highest in Africa. Everyone who has climbed it can proudly say they have been to the “Roof of Africa”. 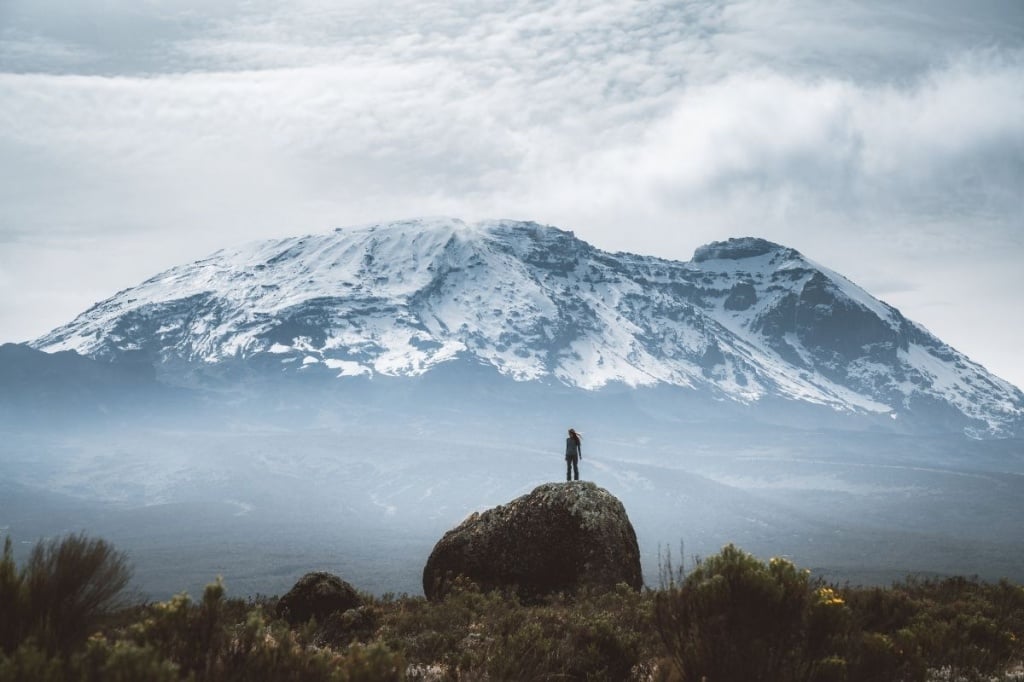 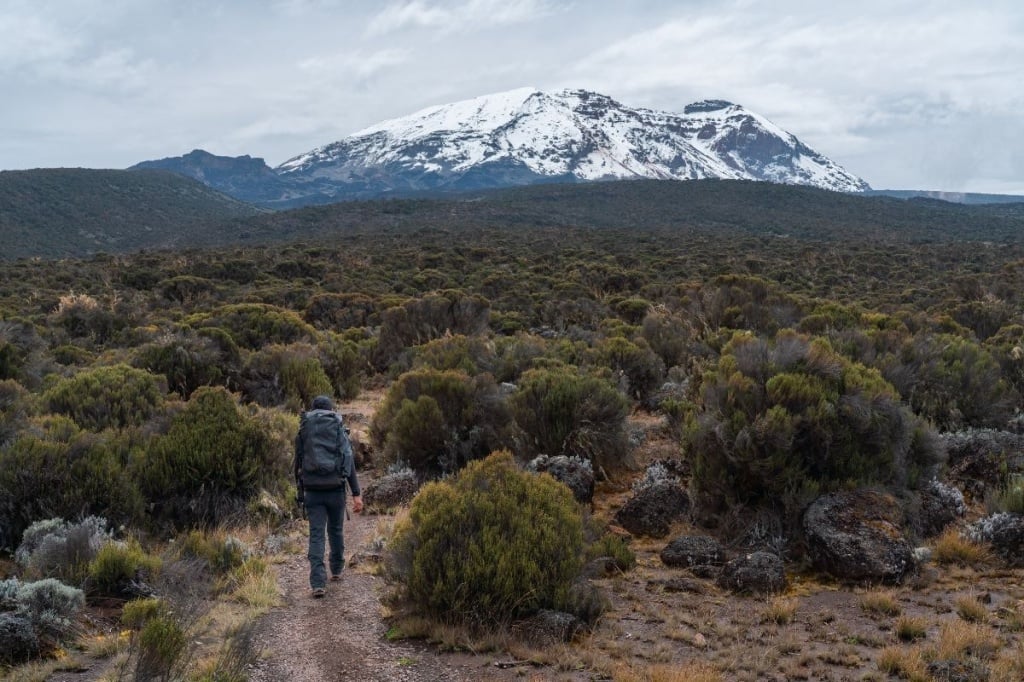 Officially, Mount Kilimanjaro stands at 19,364 f/5,895 meters. This information you are likely to find all over the internet, and this is what the sign on top of Mount Kilimanjaro reads. This is the figure that was calculated by British cartographers in 1952. Sixty years before, Hans Meyer estimated the height of Kilimanjaro on his groundbreaking climb (he was the first person ever to reach Uhuru peak). At that time, Meyer estimated the altitude of Africa’s highest mountain to be 6045 meters, and for over six decades this figure dominated the academic world in Europe. With no proper measurement tools available to him, Meyer, nevertheless contrived to provide a fairly accurate figure.

Technology has seriously advanced since then, and in 1999, a team of enthusiasts remeasured Kilimanjaro, declaring that its true height is 5892.55 meters. As we may see, the error margin was not large, and forty years earlier the British team had done a good job at calculating the height of Kilimanjaro.

In 2008, Kilimanjaro was measured once again, and this time the gauge showed that the mountain was in fact 5,891.8 meters high. The research team applied the combination of GPS and graviter methodologies, and we believe that this is the most accurate figure available to-date.

It is not clear whether Mount Kilimanjaro is in fact shrinking, or the gaugings done before 2008 were erroneous.

In any case, the difference between the 1952 British estimation and the later versions is not too significant to fret over. Most web sources, including the Altezza website, prefer sticking to the conventional number and saying that Kilimanjaro is 5,895 meters high.

Kilimanjaro is the highest free-standing mountain not only in Africa, but in the world. All other high mountains are normally parts of a mountain range, where one may see many other mountains. For example, Acongagua belongs to the Andes massif, Elbrus to the Caucasus Mountains, Everest to the Himalayas, etc. Climbers heading for these places will find themselves surrounded by other mountains, hills and other elevations.

Tanzania’s mountains look very different - Kilimanjaro is in the midst of the tropical rainforest and it rises straight up from a flat plain. The nearest mountain is Mount Meru, but there is some 100 km distance between the two peaks.  Kilimanjaro looks  isolated and majestic - towering over the African savannah and eliciting deep feelings of adventure and achievement. 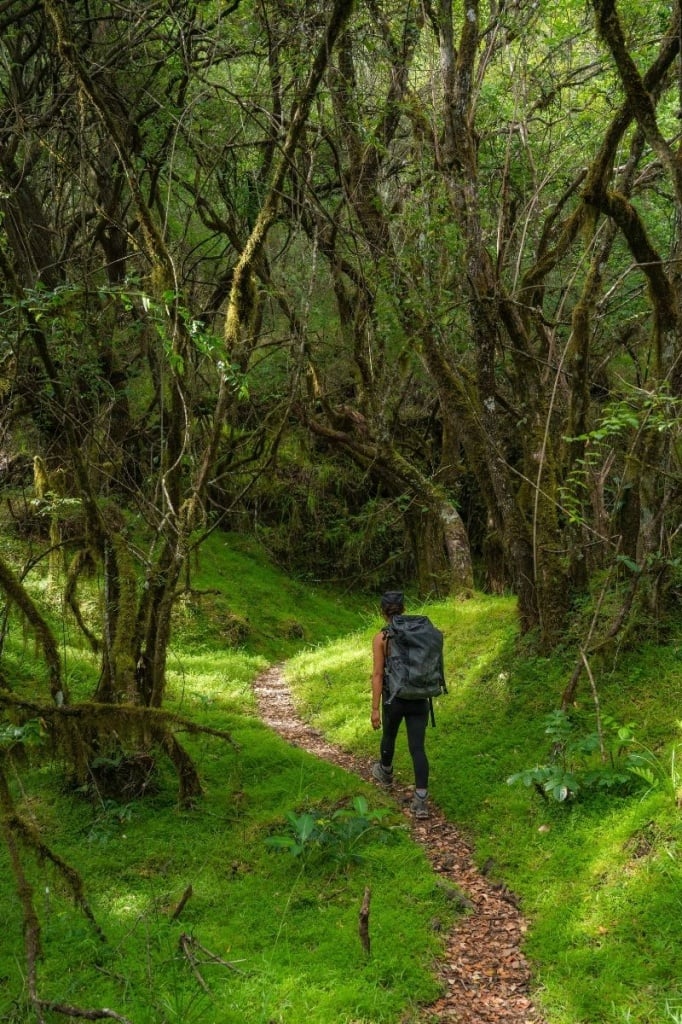 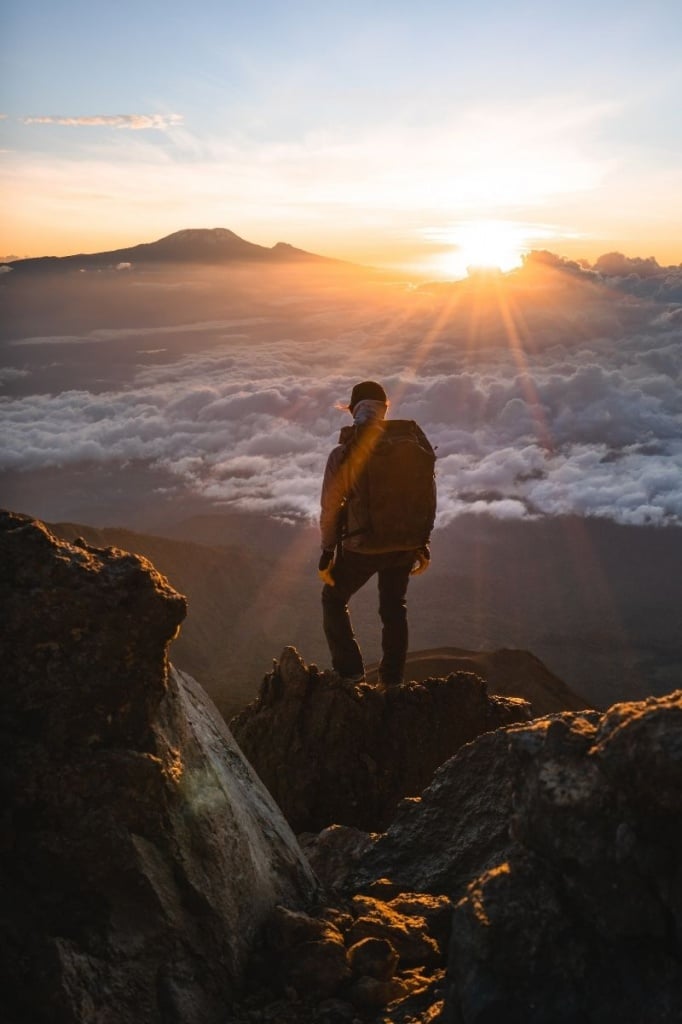 It is interesting to note that Kilimanjaro in fact has three volcano cones - Kibo, Mawenzi and Shira (however, Shira has been destroyed by an eruption).

Kibo is a central part of Kilimanjaro. Crowned by Uhuru Peak, Kibo is the highest point of Kilimanjaro (19,340 f /5,895 m), this is a place where the culmination of what we call a true “Kilimanjaro climb” takes place. All of the summit camps are located there.

In the crater area of Kibo one may see Kilimanjaro glaciers and the famous Ash Pit. 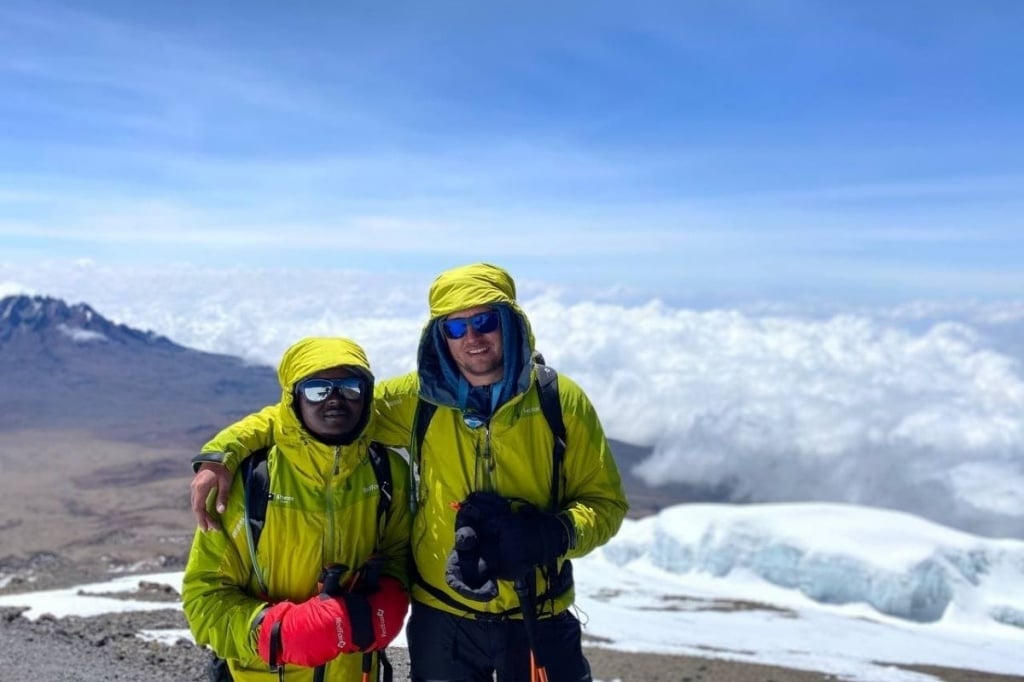 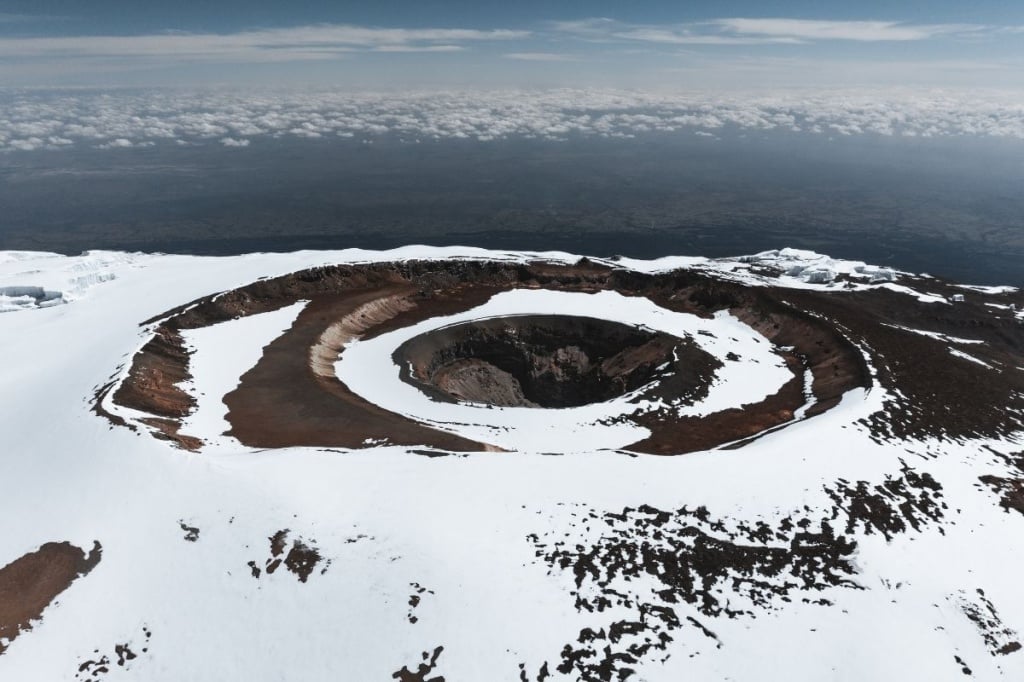 The southern slope of Kibo has another iconic attraction of Mount Kilimanjaro - Barranco Wall. Kilimanjaro hikers traverse it on the way from Barranco Camp to Karanga Camp, and the view from the top is nothing less than epic; rivalled only by the views from Uhuru Peak itself.

Standing at 5148 m (16,893 f), Mawenzi is the second peak of Kilimanjaro. It is located on its eastern side of the great mountain, and one will get an excellent view of it from Mawenzi Camp when climbing Mt Kilimanjaro via Rongai route.

Please note that hikers are not allowed to climb Mawenzi on ordinary Kilimanjaro climbs. The slopes of Mawenzi are very steep and rocky. While a trip to Uhuru Peak is a hike (though a challenging one), reaching the peak of Mawenzi requires true alpine skills. One should be able to use ropes, carbines and other gear to safely navigate this difficult climb. This activity also needs a special permit from the Kilimanjaro National Park Authority, which is issued on conditions of paying a special Mawenzi climbing fee (atop of the ordinary Mt Kilimanjaro conservation & camping fees) and providing proof that a climber has a certain mountaineering training, skills and a proven record to verify such.

At one time, Shira was the third volcanic cone of Kilimanjaro. One of the early eruptions fully destroyed its rim, and in the course of time a flat plateau eventually formed. Today this plateau is known as Lemosho Glades. It has since become one of the most panoramic places on Mount Kilimanjaro.

Hikers traverse the plateau on Lemosho and Northern routes on Kilimanjaro.

When hiking Mount Kilimanjaro travellers should be ready to gain many meters in elevation on a daily basis. The fact that Kilimanjaro stands at 5,895 m (19,340 f) does not mean that this will in fact be the exact elevation gained during the hike. The whole region of Kilimanjaro lies in the highlands, which is already significantly above sea level. For example, the regional capital, Moshi, lies at 800 m (approximately 2,600 f) above sea level. Most of the trailheads are even higher. Thus, hikers will not actually climb 5,895 meters over the course of their Kilimanjaro climb, but they will stand at that elevation upon reaching Uhuru Peak.

All climbs start at one of the route trailheads, designated by the Kilimanjaro National Park Authority (KINAPA). They are as follows: Londorossi Gate, used for Lemosho and Northern Circuit treks. This trailhead starts at 2360 m or 7740 f. Be mindful, though, that most of the trip starts higher, at the Lemosho glades at 11,500 f (3,500 m). This is done to ensure a smooth acclimatization transition.

Thus, when choosing a Lemosho or Northern Circuit route for your Kilimanjaro hike, your total elevation gain will be 2,395 meters or 7,840 feet only. It does not appear so daunting now, doesn’t it? 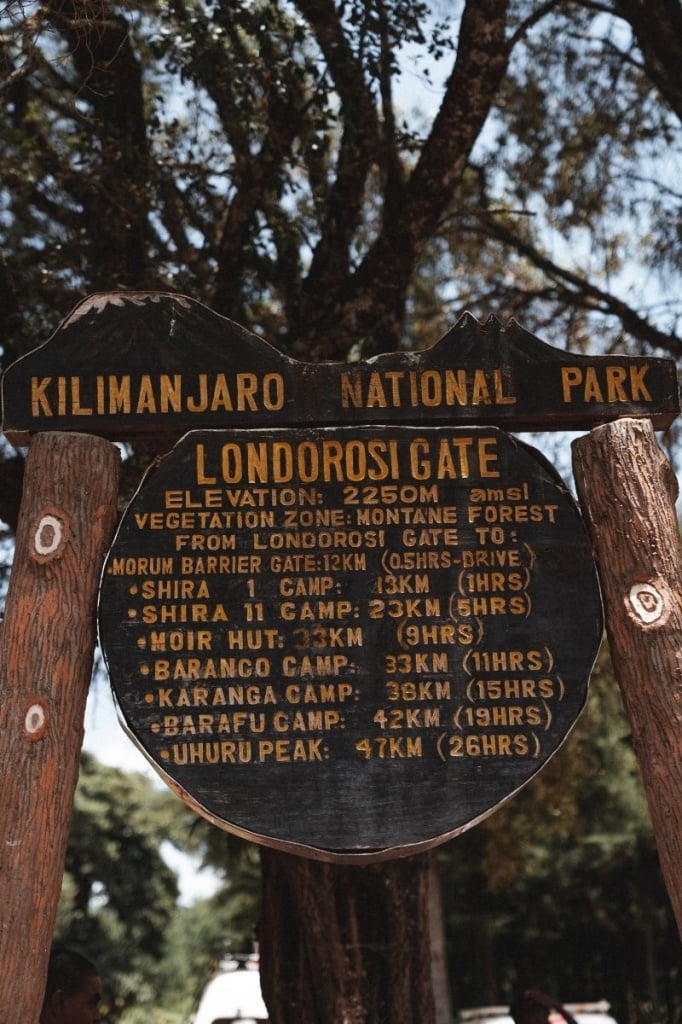 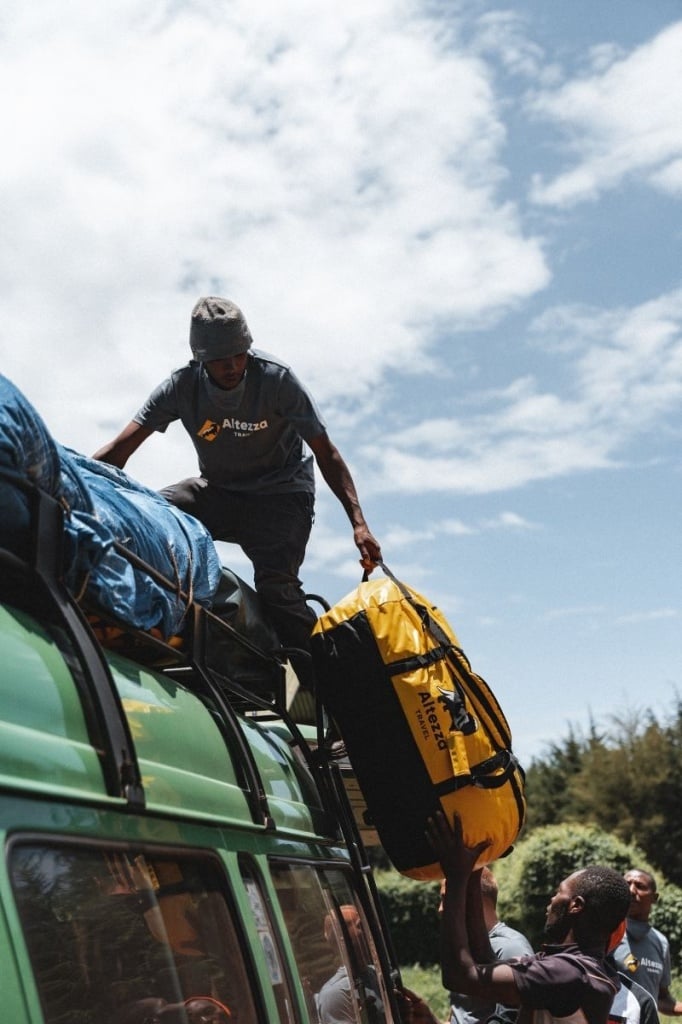 Marangu Gate sits at 8860 f (2700 m). It is the starting point for the Marangu route, the most popular trek on Kilimanjaro.  After doing some simple math, we can say that your total elevation gain on this route will be 10,480 feet or 3,195 meters.

Machame Gate is where all Machame route expeditions start. Its altitude is 5720 f (1740 m) above sea level. Accordingly, when climbing Mount Kilimanjaro through the Machame route your total elevation gain will be 13,620 feet or 4,155 meters.

Nalemuru Gate marks the beginning of the Rongai route, the only trek approaching Kilimanjaro from the North. It sits at 6,400 ft or 1,950 m above sea level, resulting in 12,940 feet or 3,945 meters of elevation gain.

Overall, as you may see, climbing Mt Kilimanjaro does not exactly mean that it is strictly 5,895 meters (or 19,340 feet) up to the top. We should always remember that the trekking expeditions are not starting at sea level, and, depending on the route, hikers have some advantage here.

Do not fall into a trap of thinking that the higher you start, the easier the adventure will be. Proper acclimatization is the most important thing for summit success, and for this reason we strongly recommend considering Kilimanjaro itineraries with 7 more days. According to our statistics, 7 or 8 day Kilimanjaro treks see consistently more successful climbs to Uhuru Peak.

If you are interested in learning more about how to obtain our statistics, and which routes have the most success, read more here.

Or, ask our consultants, they are always ready to help!

Which Mountain is the second highest?

The second highest mountain in Tanzania is Mount Meru. It stands some 43 miles (or 70 kilometers) to the western side of Kilimanjaro at an impressive 4,566 meters (14,968 ft) in altitude. On a sunny day, you may see its peak towering over the sky from certain places on Kilimanjaro. Like Kilimanjaro, Mount Meru was also once a volcano which erupted. While Kilimanjaro is considered an extinct volcano (meaning it will never erupt again), Mount Meru did erupt some 100 years ago, meaning that it is technically classified as a dormant volcano.

Climbing Mount Meru usually takes 3-4 days. This is an excellent exercise to boost your acclimatization transition before the Kilimanjaro adventure, and it is also a wonderful adventure in its own right.

A Mount Meru climb means a walking safari through Arusha National Park, as well as sure sightings of buffalo, bush bucks, herds of zebra and possibly even giraffes. There are a plethora of birds, primates and alpine wildlife in the forests of Mount Meru, for an up-close wildlife experience only available in Arusha National Park. The final trek to reach the peak of Mount Meru traverses around the edge of the crater rim, which is an exciting hiking experience for adventure-seekers.

There is only one designated route on Mount Meru, Momella Route. Overlooked by many visitors, Mount Meru hike is a fascinating experience. Because there is a likely chance of seeing animals on the way an armed ranger from the Arusha National Park service accompanies each trekking party. 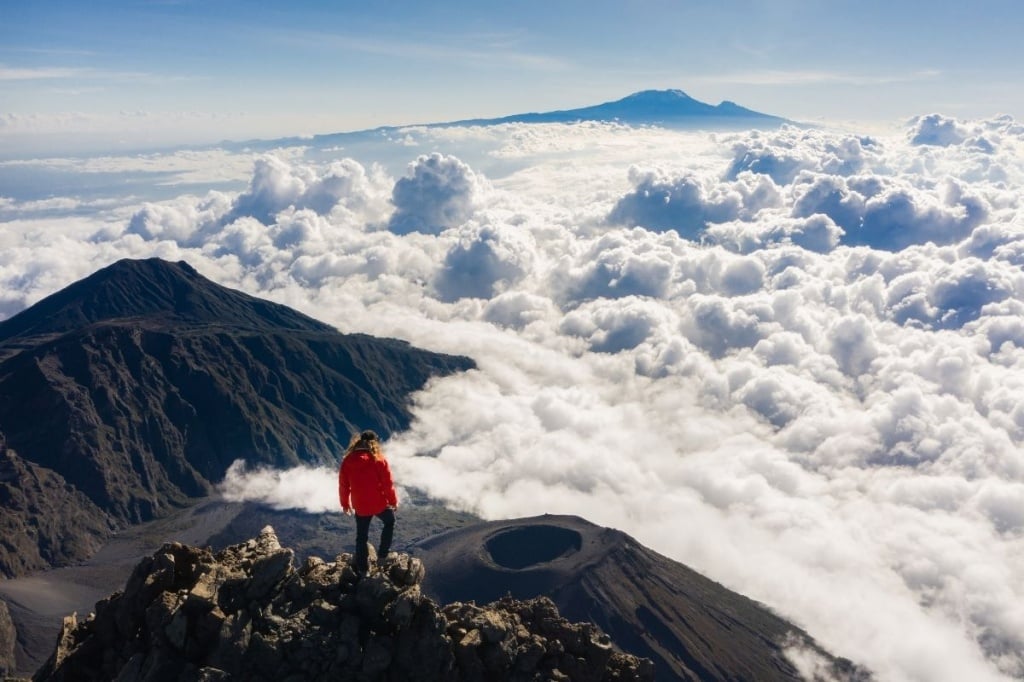 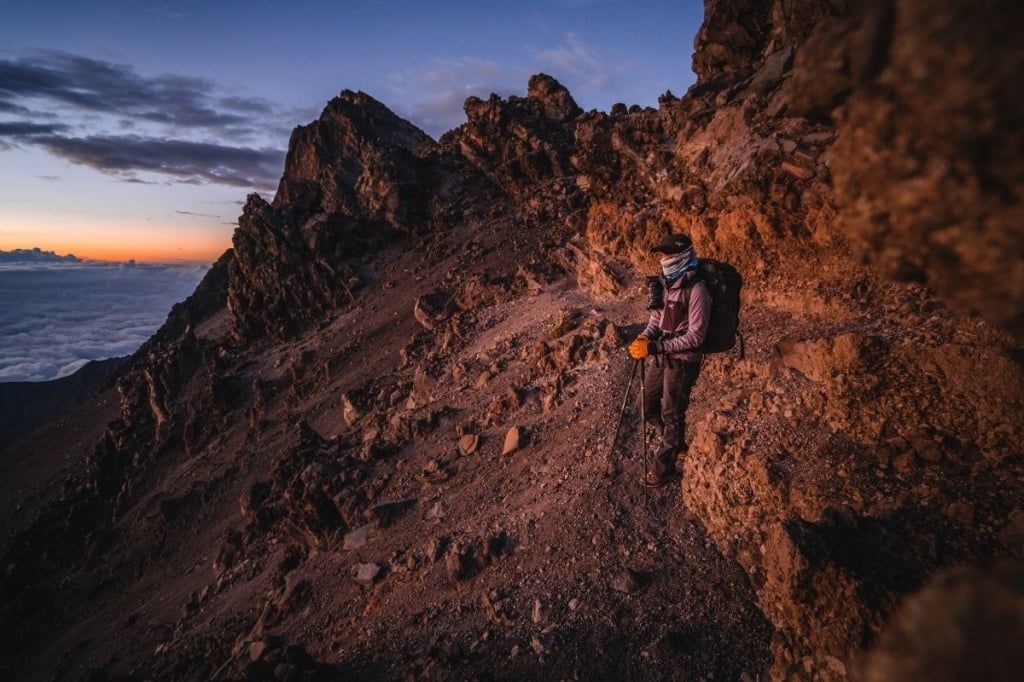 Is Kilimanjaro the tallest mountain in the world?

No, the tallest mountain in the world is Mount Everest (also called Jomolungma) in the Himalayas. Its peak boasts an impressive 8,849 meters (29,031 feet) altitude, making it one of the hardest mountains in the world to climb.

A Kilimanjaro adventure is sometimes taken as one of the first preparatory climbs for an Everest adventure. In fact, the summit of Kilimanjaro is not much above Everest base camps, which sit at 5,364 meters in the south and at 5,150 meters in the North. Compared to Everest climbing expeditions, which take up to two months to complete and require serious preparation, Mount Kilimanjaro can be seen as almost a leisure activity.

At the same time, Kilimanjaro has been recognized as the tallest free-standing mountain in the world. As said above, Everest belongs to the Himalayas mountain range, and it is surrounded by many other eight thousanders (peaks over 8,000 meters). Kilimanjaro stands on its own, majestically towering over the pristine African savannah.

Kilimanjaro is the tallest mountain in Africa, and the tallest free-standing peak in the world. It is an extinct volcano with a unique history. Here, climbers can experience ice and snow while almost standing exactly on the equator. A Kilimanjaro trek means a chance to experience Africa’s wildlife (and if you’re lucky, spotting some unique animals, too!), and complete one of the Seven Summits. 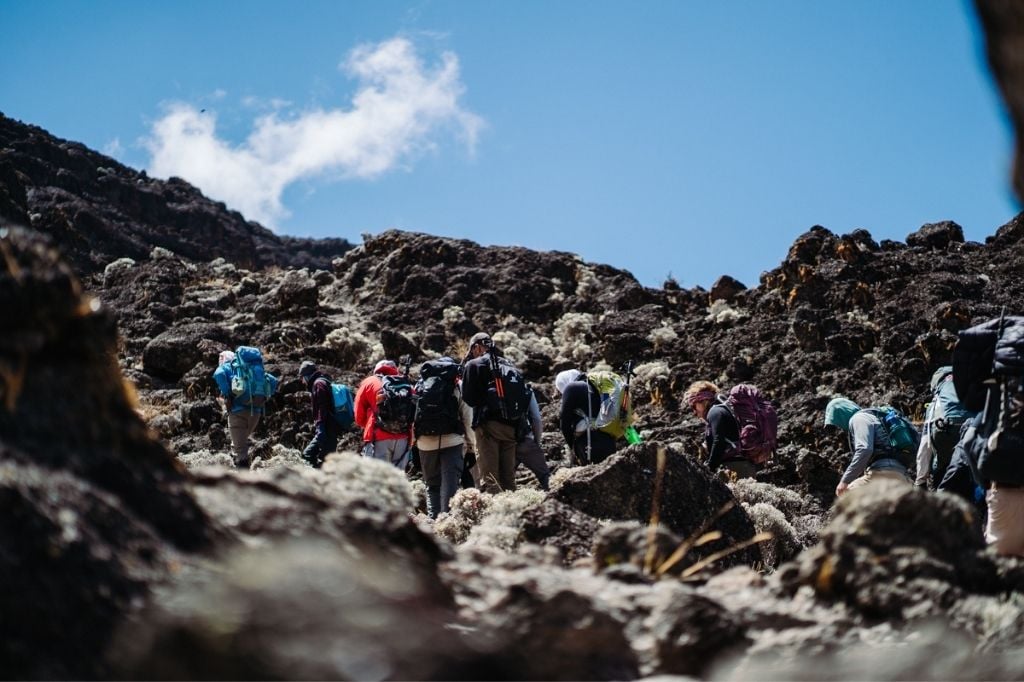 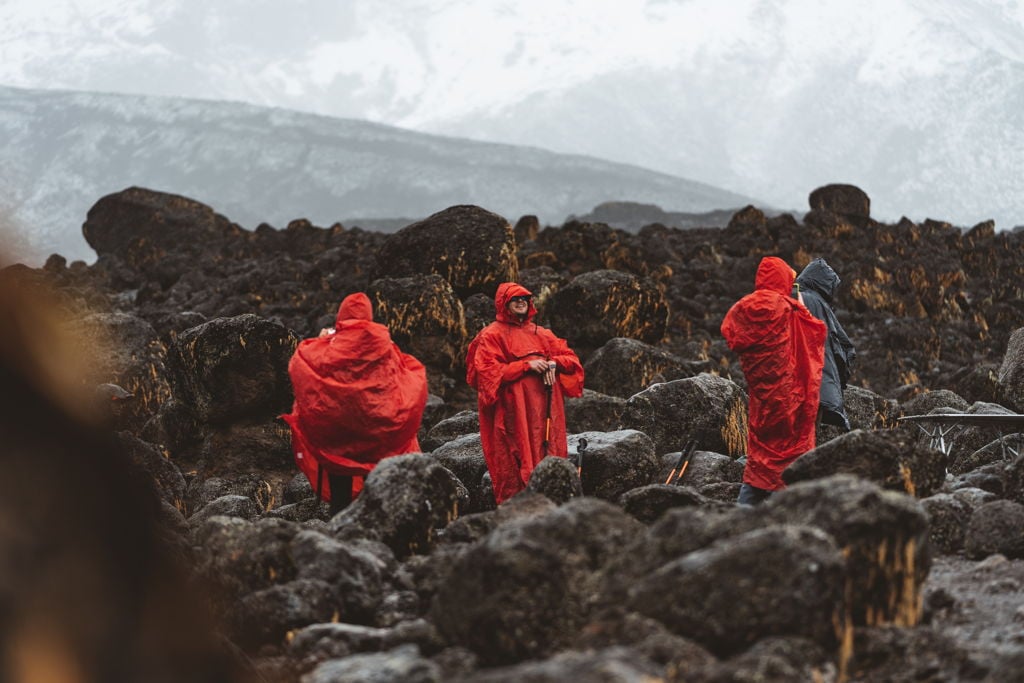 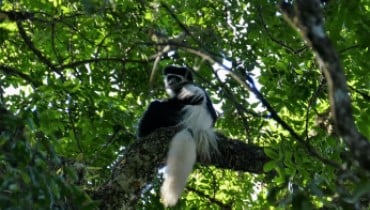 Climbing When is the best time to climb Kilimanjaro? 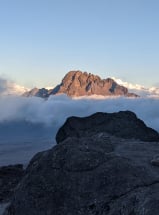 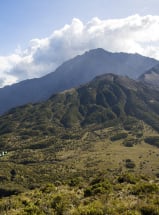 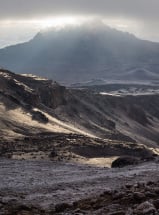 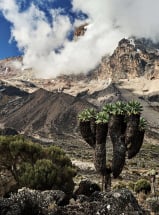