In May 2022, Altezza Travel planted over 1000 trees along the Rundugai river near Chemka, a popular recreation location 15 km (9 miles) away from the Kilimanjaro airport. Now the shelter belt along the watercourse is restoring. In this feature, we cover the works aimed at amenity planting in the area. 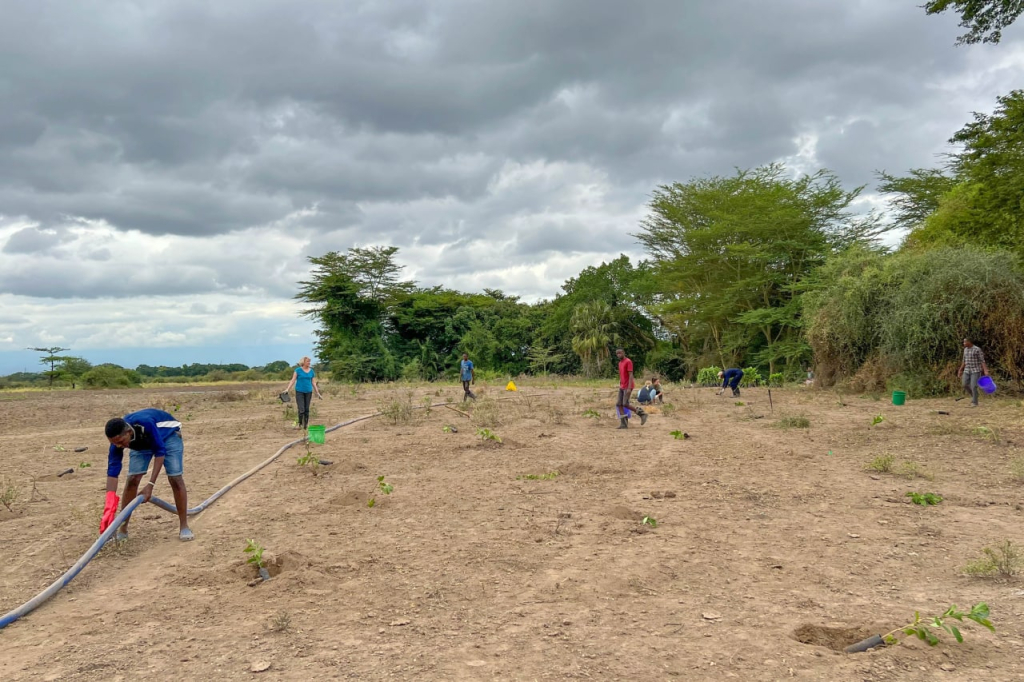 What We Have Already Done

May was rewarding: first, we planted over 400 trees on the bank of the Sere River in the buffer zone of Kilimanjaro Park, and then we reinforced the banks of the Rundugai. In both cases, the forest floor was damaged and the channel became bare, endangering the entire ecosystem. This often happens in places where people come into contact with nature, and it takes extra effort to restore the damage. Altezza Travel specifically bought an unforested plot of land to plant it with trees. 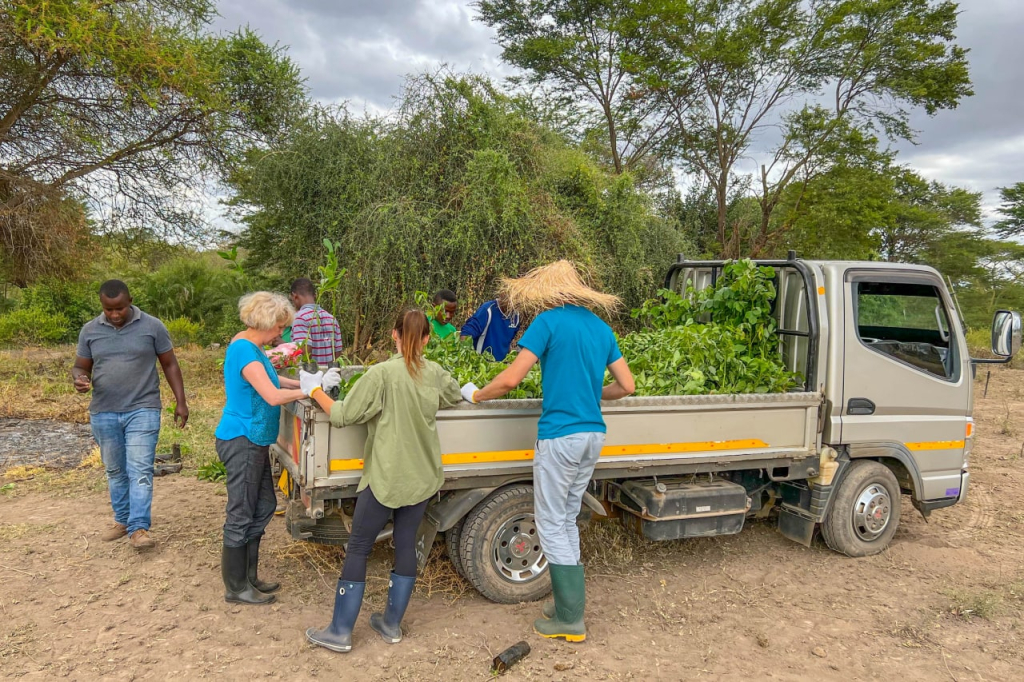 On May 26 and 27, the Altezza Travel team began rebuilding the Rundugai shelter belt. We set up camp at the site to prepare the soil. The ground here is stony, which means we first had to loosen its top layer, and then begin planting trees; moreover, we had to additionally fertilize the soil. 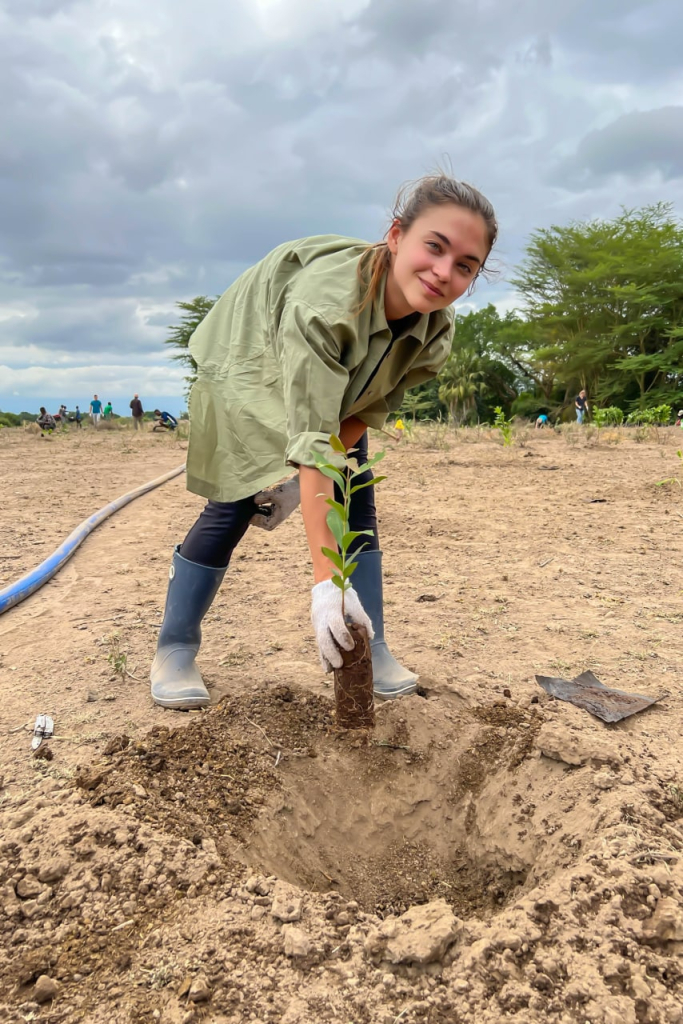 Managers of Altezza took part in the tree planting... 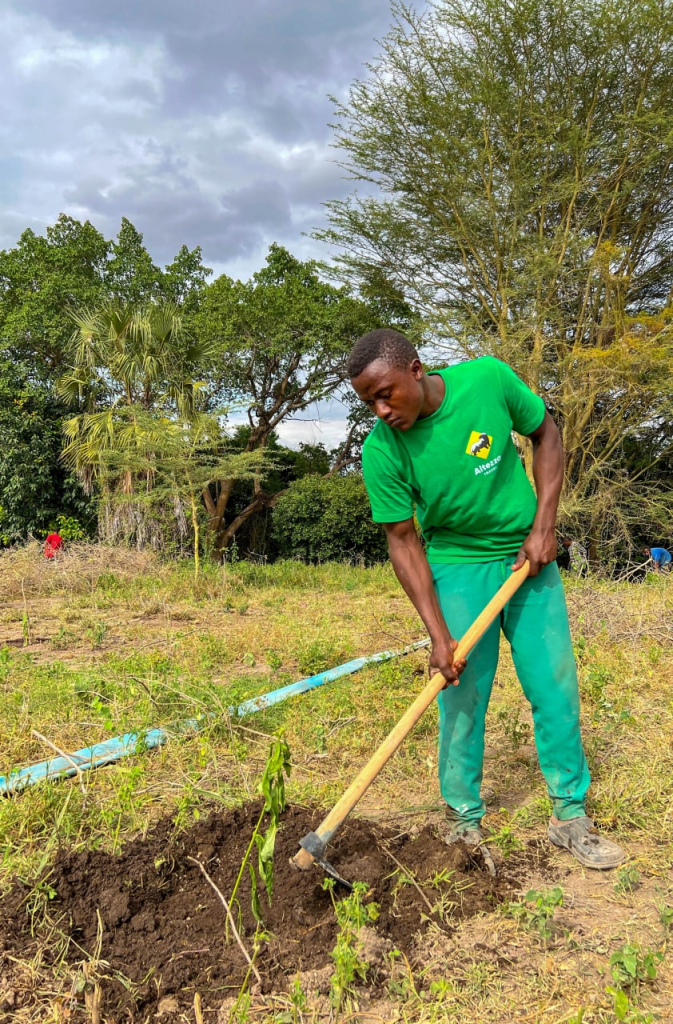 ... shoulder to shoulder with the gardeners of Altezza's hotels

All the gardeners from the company's hotels, as well as other members of the Altezza team, our friends, and a few hired local workers, took part in the campaign. As of May 23, when we planted trees in the forest area of Kilimanjaro National Park, the process was led by Michael, one of Altezza Travel's key employees, who has extensive experience in horticulture. 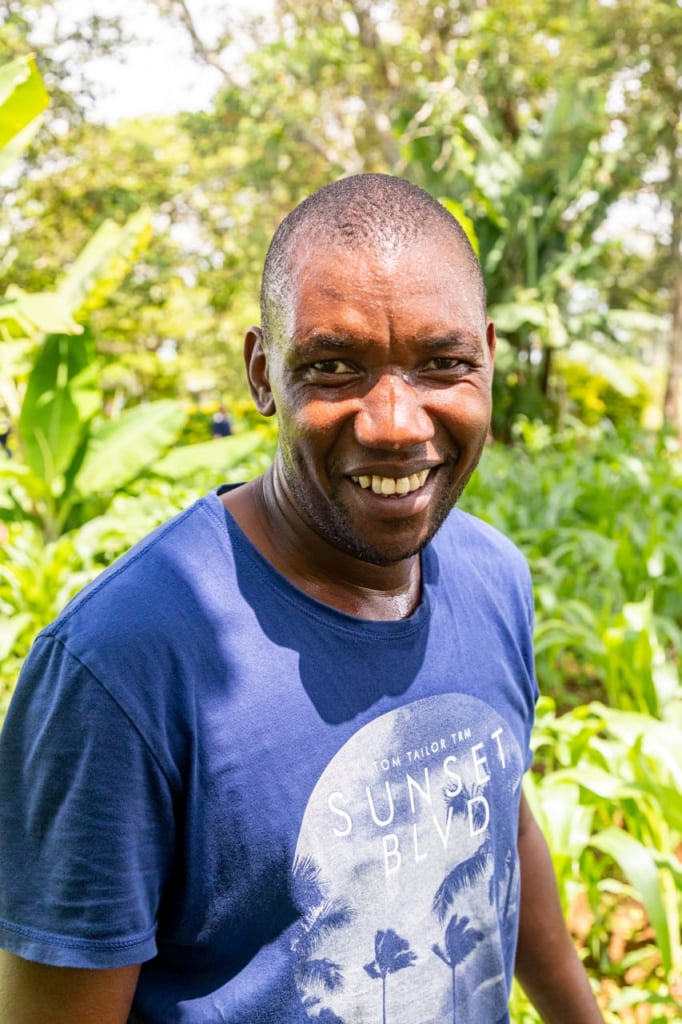 Michael is in charge of the climbing gear at Altezza Travel 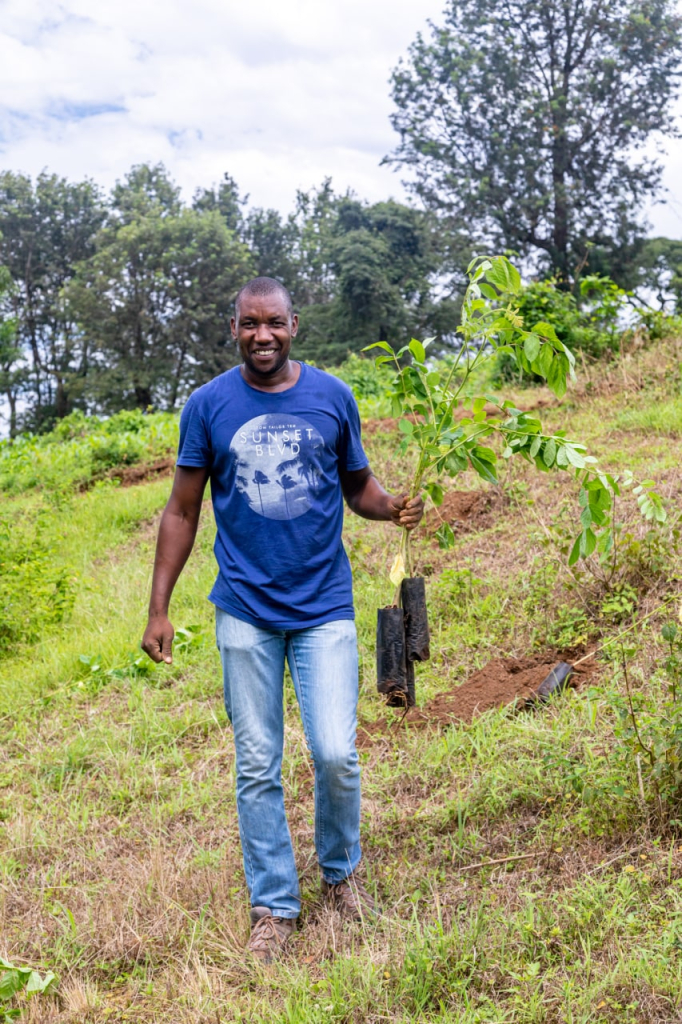 During the first stage, we planted about 300 trees in the area closest to the water. This is the most important part of the shelter belt because the tree roots bind the soil preventing the river from eroding the bank. Residents of the nearby villages come to the river in this area to draw water, and they also bring their cattle here for watering. This is where the land is trampled and the green cover is completely destroyed. Unfortunately, the district authorities do not inform local residents about the connection between human activity and the deplorable ecological consequences. 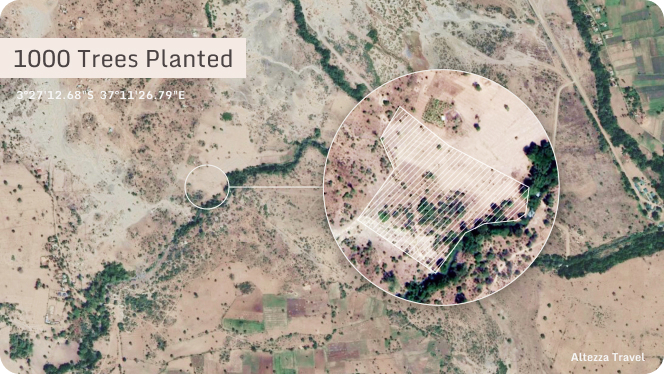 The bank requires natural protection at a width of 60 meters from the river's edge. We have successively planted the entire bare ground, distributing the trees at a distance of three meters from each other. Each sapling requires additional protection due to the harshness of the local soil. In addition to watering the young trees individually, an automatic sprinkler system with a 360° rotation pattern irrigates the entire plot. 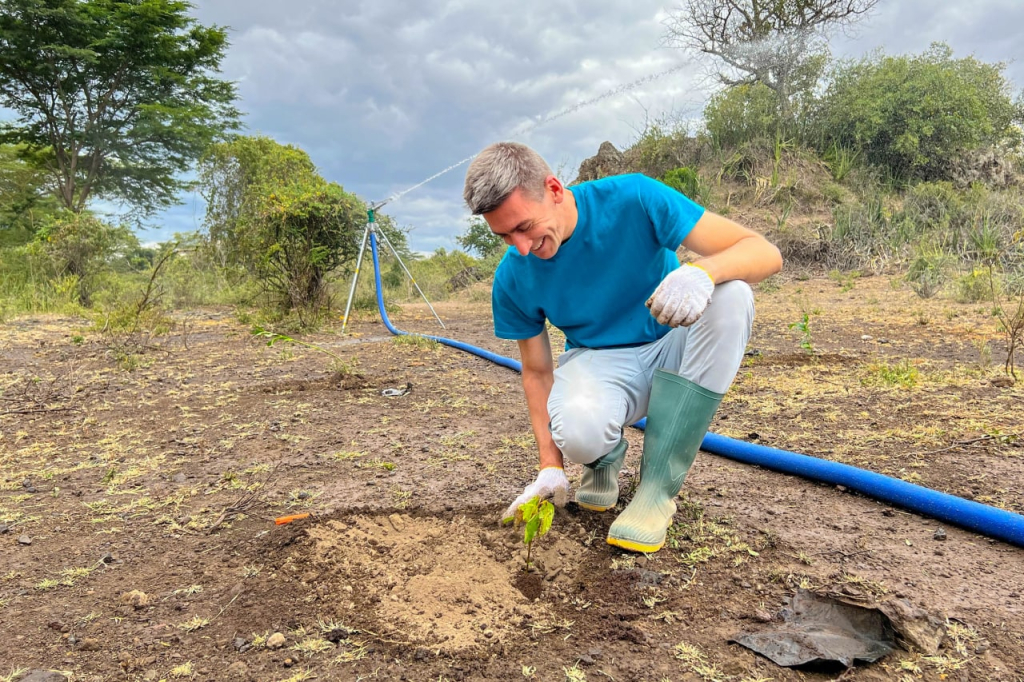 We also bought manure from local farmers to fertilize the soil around the saplings. After planting, the fertilized and moistened soil around the plants is covered with green grass and shrub branches that we mowed while preparing the area for tree planting. 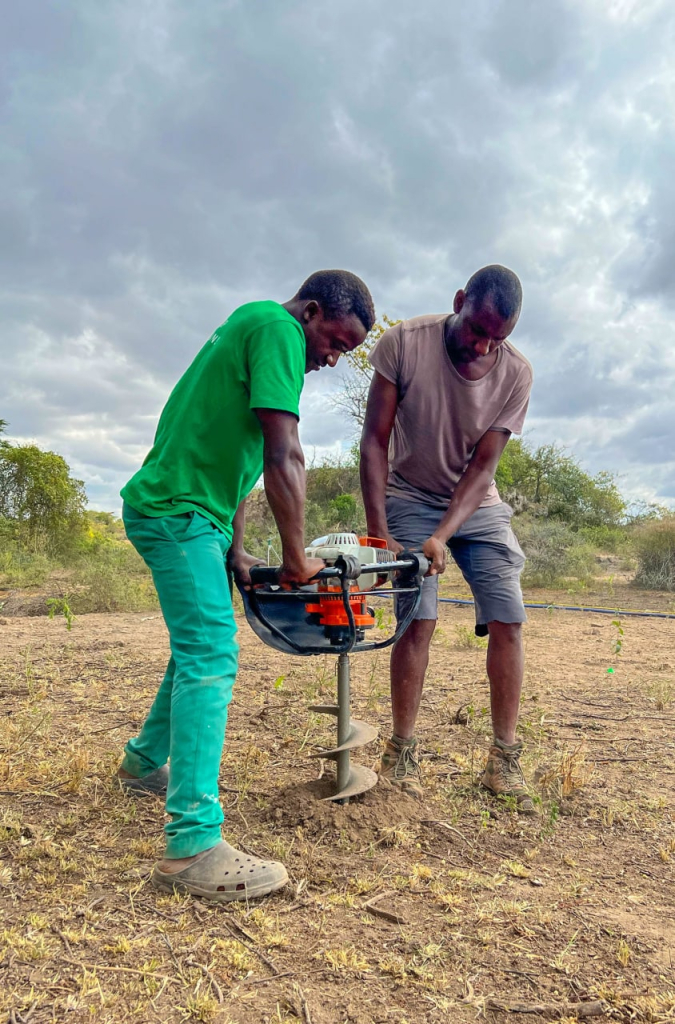 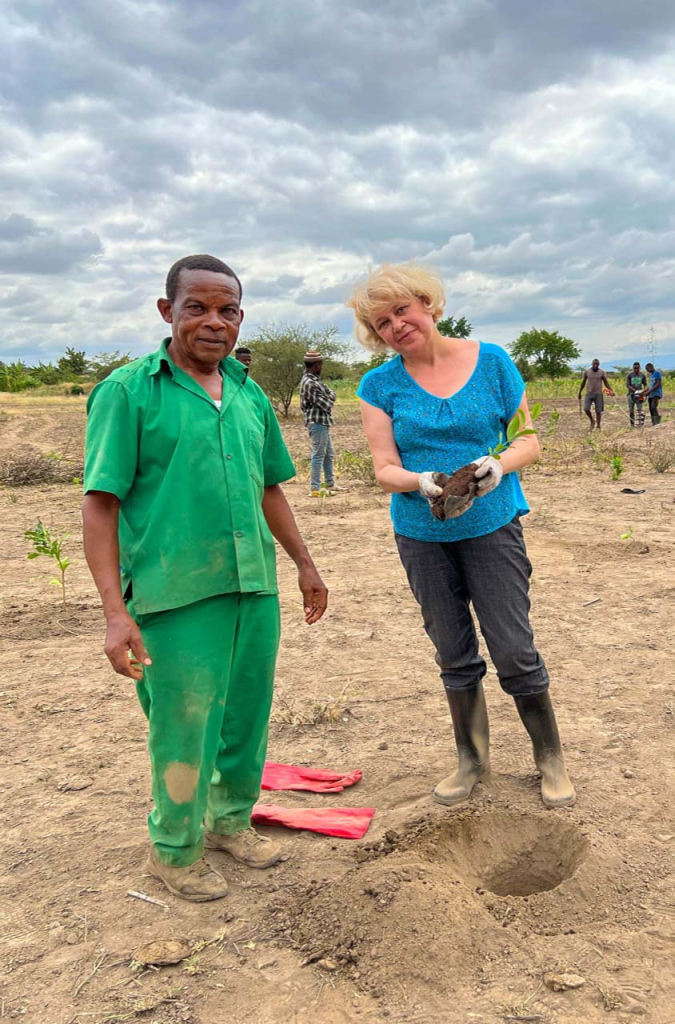 The next step is to plant seedlings

In total, Altezza Travel has purchased more than 1,000 trees to create a green space in this damaged area. Among them are Rauwolfia, or the South African cinch tree; Spathodea, the tulip tree with bright red flowers that look like a fountain; the golden Markhamia with beautiful yellow bells, the biblical fig tree of the Ficus family; and the African kigelia which has a funny second name - a sausage tree - given for its long fruit that hangs like sausages under the tree’s crown. 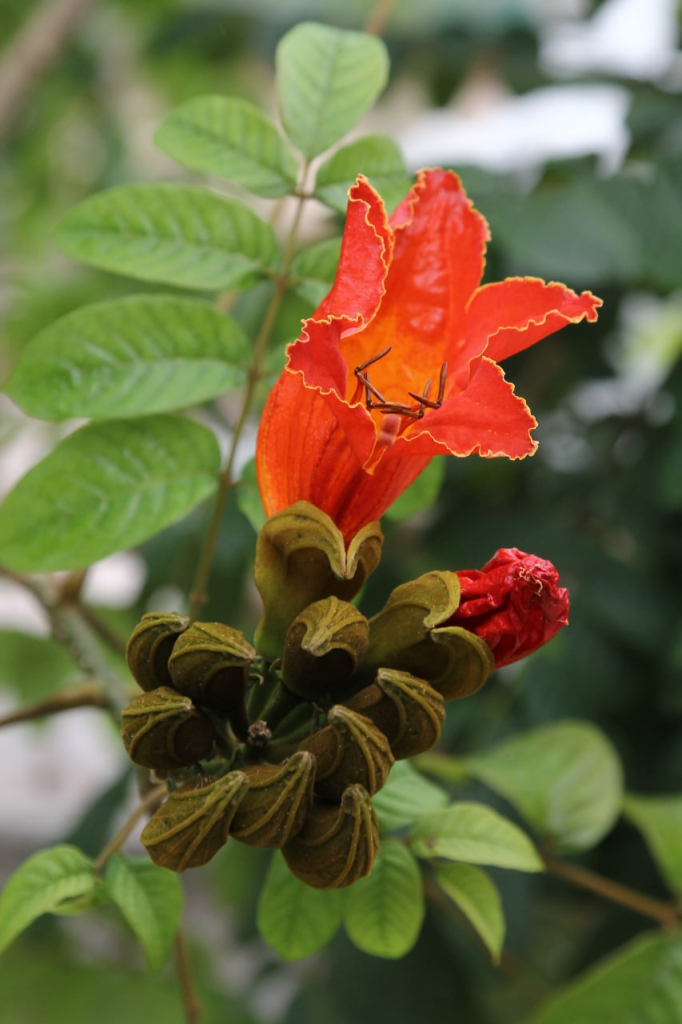 A flower of African tulip tree 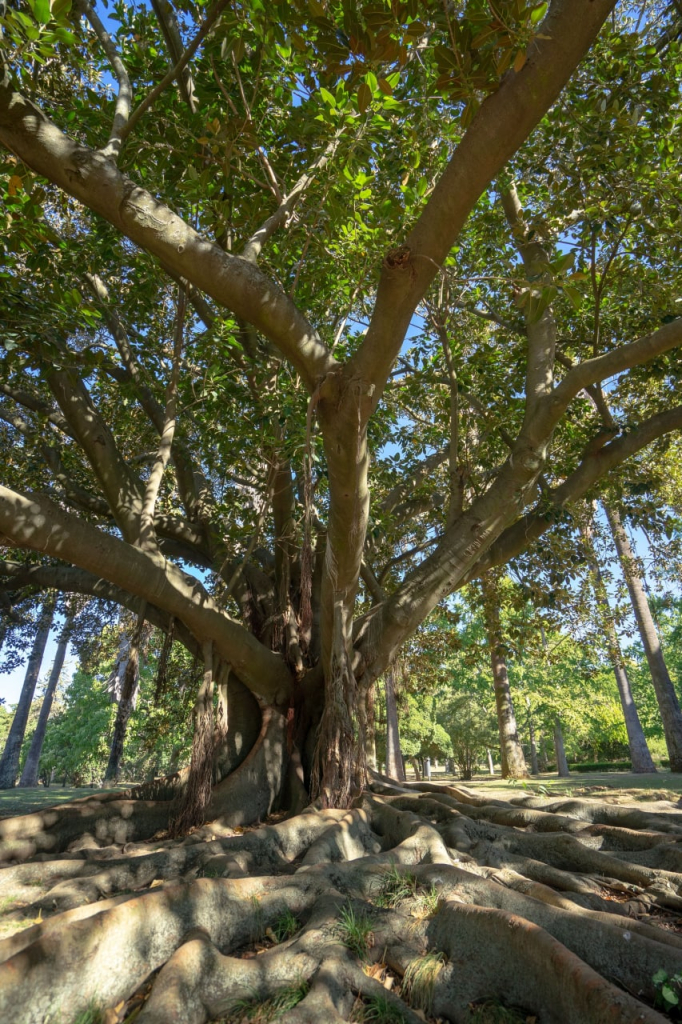 The vigorous root of a sycomore fig 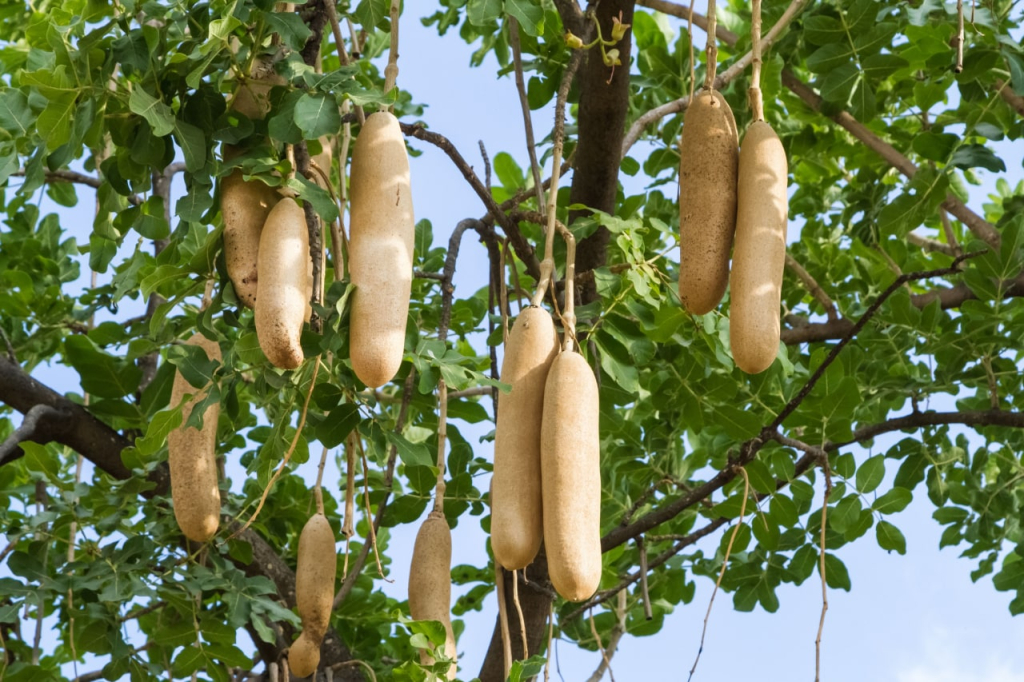 All the planted trees had to take root and get everything they needed to grow quickly. For that purpose, there are still people staying near the site in our field camp for a while. They will watch the seedlings, water them, and protect them from animal and human encroachment. 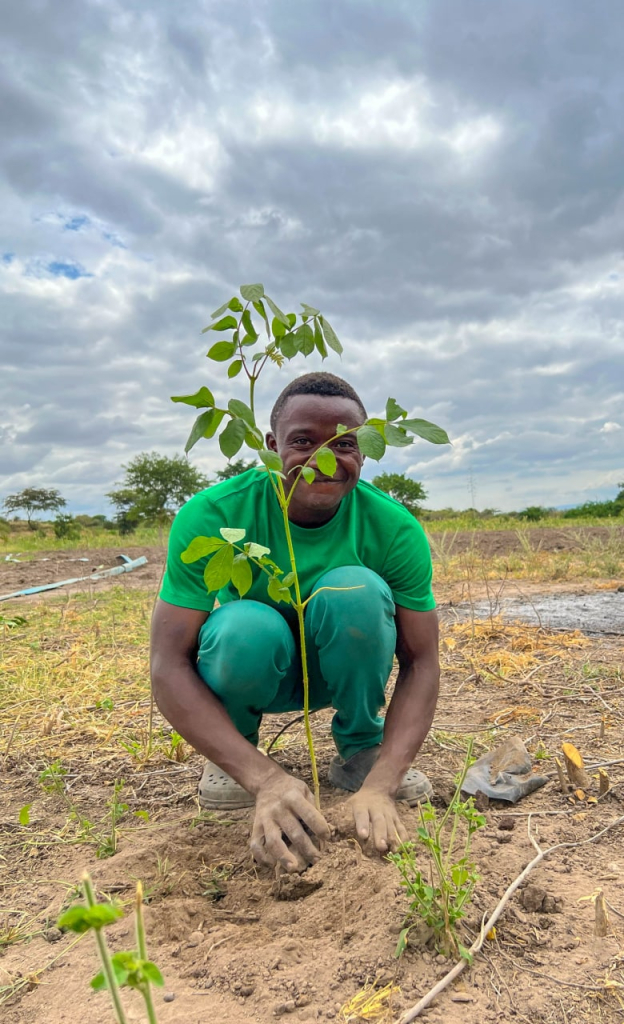 Everyone enjoyed their day out planting new trees 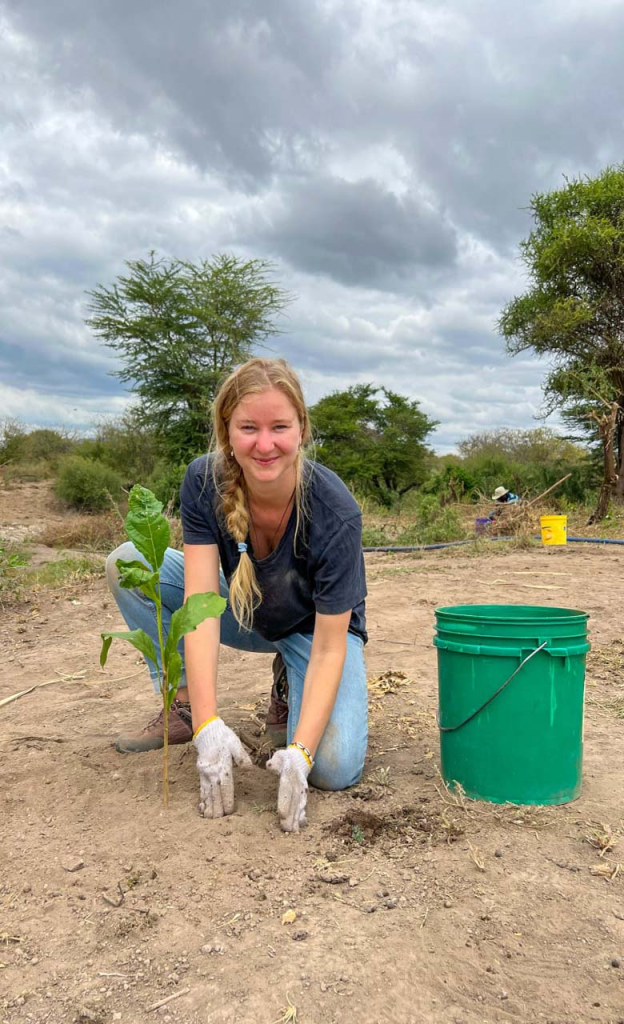 One of the main threats to the young plants is the herds of goats brought to graze by shepherds from the nearby villages. During a previous attempt to plant trees: goats nibbled at the stems, and the seedlings died. This time we took measures: we fenced off the area with dry thorny branches of weed bushes and left guards in the camp who would drive the animals away during the first year of the saplings' acclimatization. 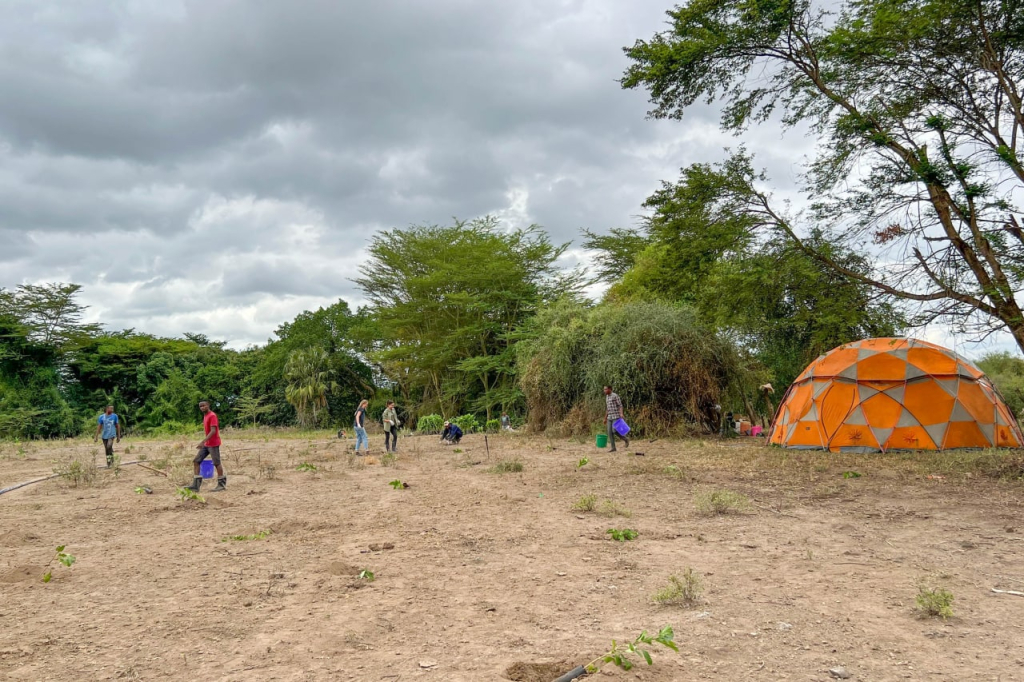 Our camp near the site

What Is Still To Be Done

Once the young trees will have taken root at the new place, we plan to plant fruit bushes between them to create the second level of plant life. The third and the lowest level will be grasses and mosses that will be created by transferring already enriched soil from the neighboring plots. 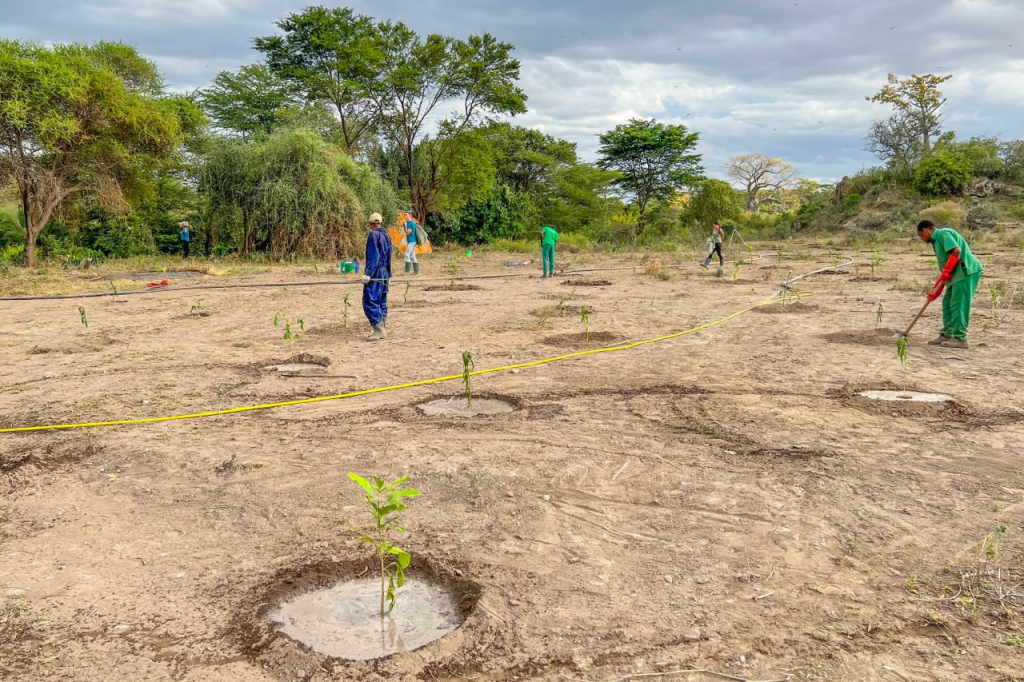 First stage of handling the saplings on the Rundugai bank

During the first months of the trees' lives, we will take good care of them and monitor their growth. We plan to supplement this feature article with photos from time to time. In the future, we will add both photo reports and satellite images of the area to clearly show the process of ecosystem restoration on the Rundugai River. Follow the life of the trees with us!

Revised on 14 November 2022
Want to know more about Tanzania adventures?
Contact our team! We have been to all of the top destinations in this land. Our Kilimanjaro-based adventure consultants will gladly share our travel tips and help you plan the trip. 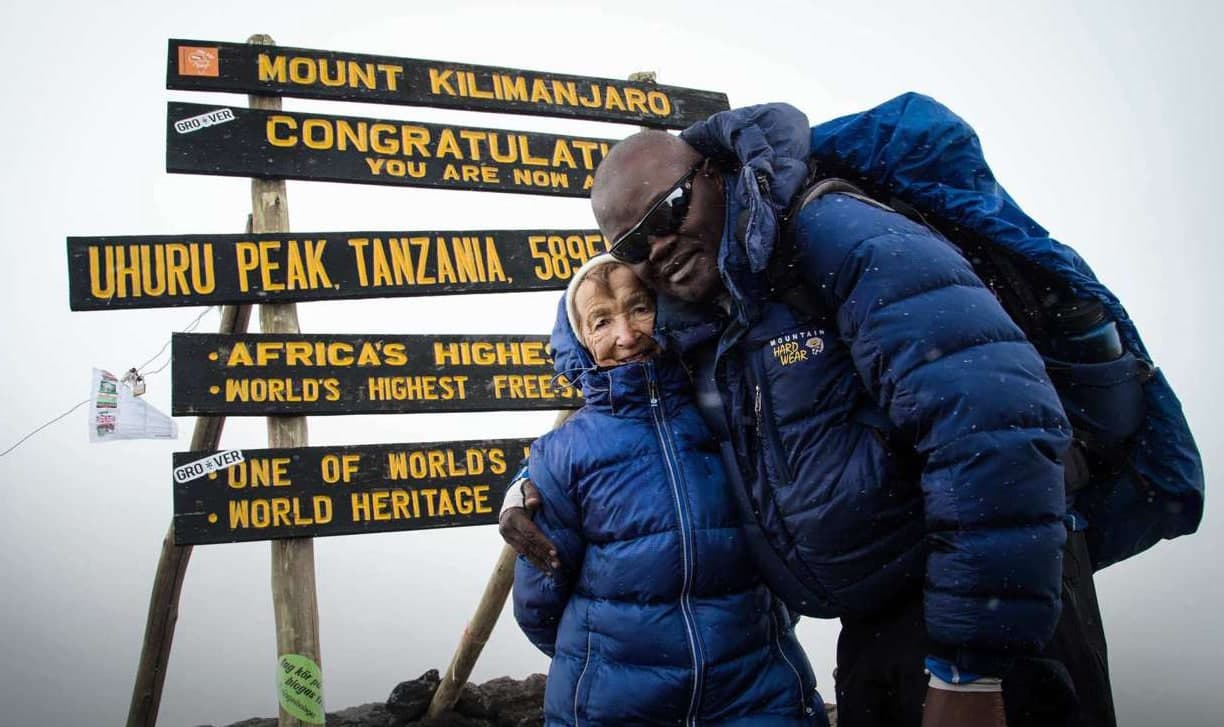 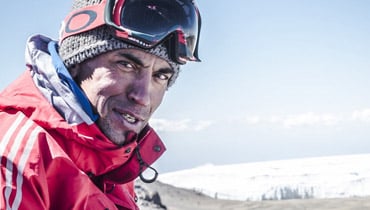 Our projects Trip report: the first BASE jump from the Mount Kilimanjaro 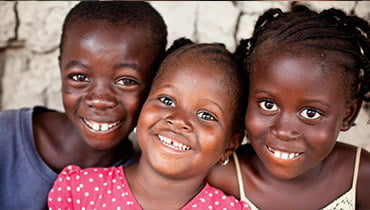